An Automotive-grade Proven LiDAR with Wider Application in More Industries

As many are aware , the first LiDAR-equipped mass-produced vehicle in China, Xpeng P5, is installed with two Livox HAPs. Judging by the results of the P5 OTA update released publicly for user devices as well as the P5 road test, Xpeng continues to be at the forefront of the industry with its smart assisted driving technology, facilitated by Livox’s LiDAR HAP. The advanced driving assist functions that set the carmaker apart are Valet Parking Assist (VPA-L), Enhanced Adaptive Cruise Control and Lane Centering Control (ACC/LCC-L), and City Navigation Guided Pilot (CNGP). Through these features, consumers are able to truly experience the value and performance of LiDARs.

On the 11th of July , Livox officially launched HAP for sale to the public at $1599 per unit, in a bid to initiate hybrid solid-state LiDARs into broader commercial use and mass production while introducing a new generation of LiDARs with greater performance and reliability to spatial detection solution developers worldwide.

Double the Performance at the Same Price Level

As  Livox’s first automotive-grade LiDAR, HAP is not only reliable as a sensor component, but also stands out with its exceptional performance.

In this article, we will be sharing parts of the “HAP Performance Test Report” that most of our customers would be interested of. For those who would like to check out the full version of this report, please contact us to request. 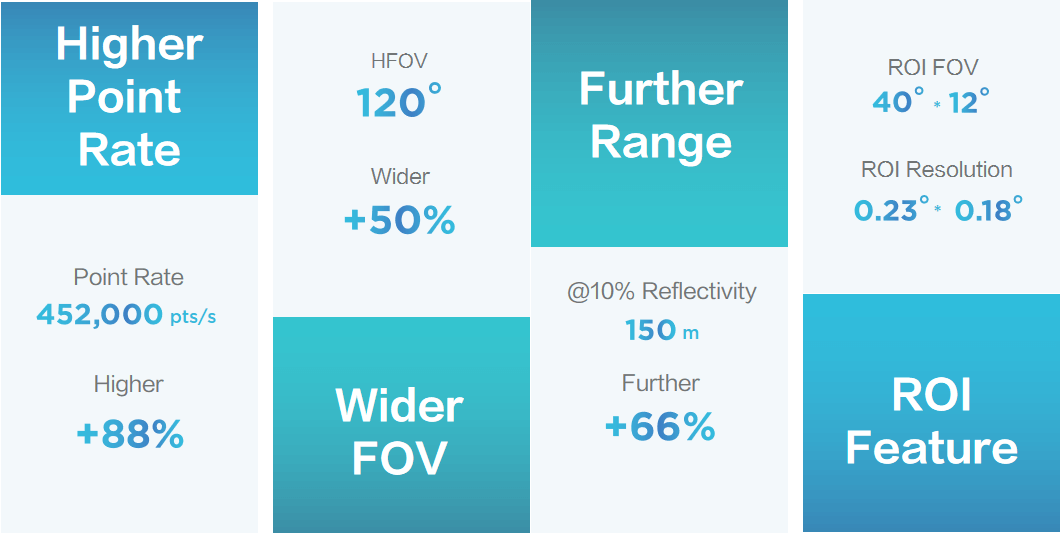 A LiDAR’s distance-measuring ability is determined by its sensing and detection capability margin. The larger the range and area covered, the stronger the LiDAR’s ability to detect a target, giving the system more time to react. In Xpeng P5’s case, HAPs are mounted on both sides near the headlights. Therefore, we installed HAP at a similar height in this test, which involved common targets such as vehicle, pedestrian, and traffic cone.

Based on a distance test, it was found that HAP could effectively detect a white sedan at 150 meters away; while at 200 meters, HAP could still capture more than 7 points on the body of the sedan. 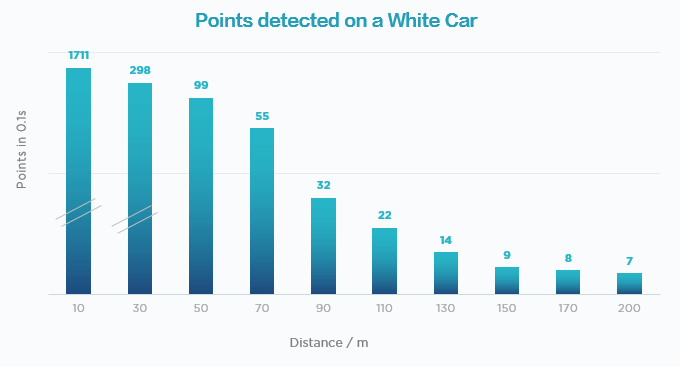 For a black vehicle with lower reflectivity, HAP was able to detect 9 points on the vehicle at 150 meters away and 5 points at 200 meters away. 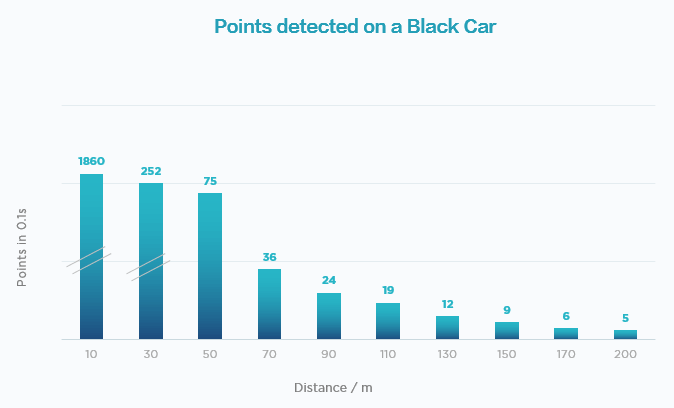 In this test, a 170cm-tall pedestrian dressed in white was used as the target. The result shows that HAP detected 12 points on the person at 90 meters away, and 5 points at 130 meters. 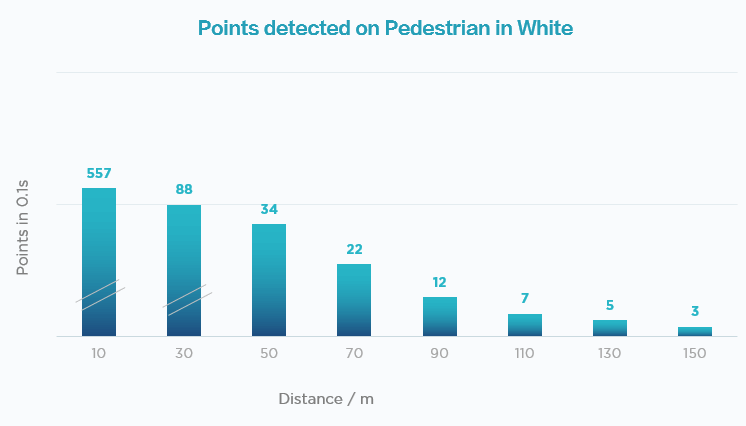 When the target was a pedestrian in black clothes with lower reflectivity, HAP was able to capture 12 points at 90 meters and seven points at 110 meters. 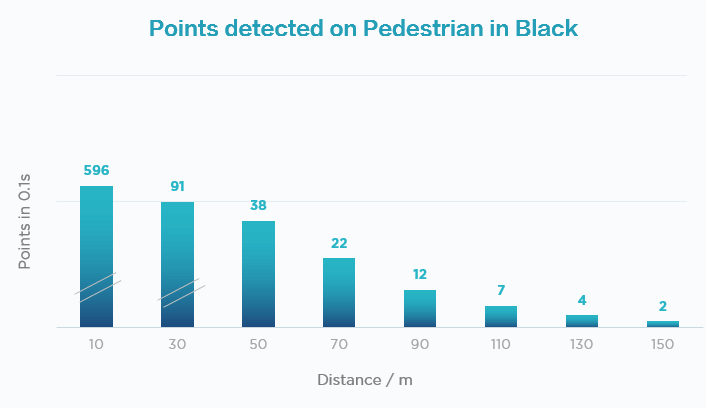 In this test, the LiDAR could detect 5 points on the traffic cone  when the object was placed 110 meters away 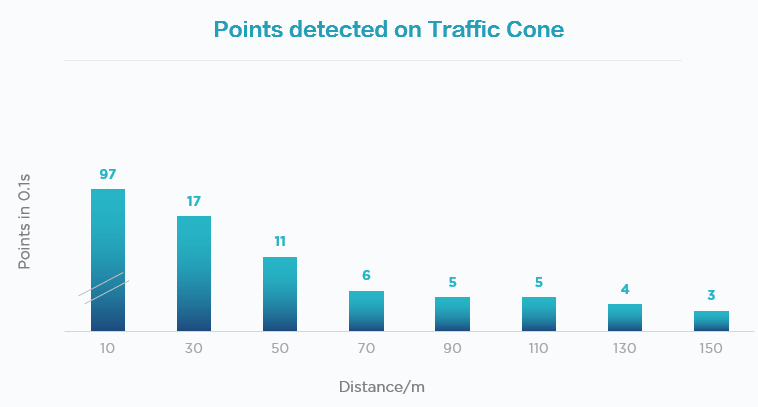 Some customers may want to mount their HAP at a higher position such as rooftop for a longer-range-detection purpose. Therefore, we also conducted tests for such a scenario, which can be found in the full version of the report.

Although HAP outputs up to 452,000 point clouds per second, they are not uniformly distributed across the FOV (120° horizontally, 25° vertically). The central zone of HAP’s FOV (40° horizontally, 12° vertically) is defined as the region of interest (ROI) with an angular resolution of up to 0.18° horizontally and 0.23° vertically.

As an actual operation, the detection of small objects is a true test of the point cloud density of LiDARs. As shown below, we have tested HAP’s ability to detect small objects using three objects: Carton box, football, and water bottle.

For this test, HAP is able to detect more than 5 points when the carton box is at 55 meters away. 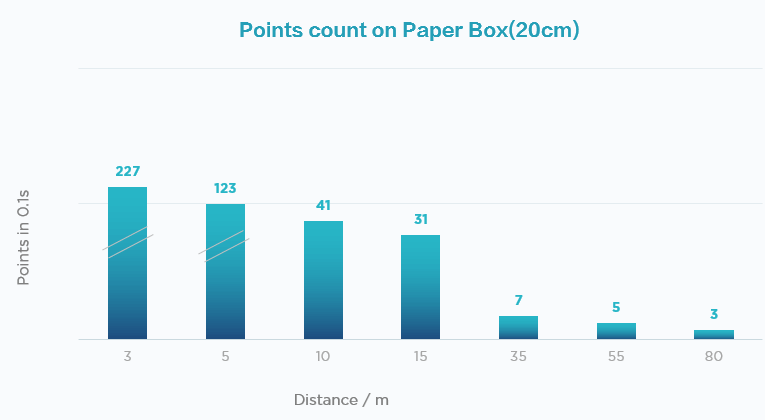 When a football is 45 meters away, HAP could still capture 6 points. 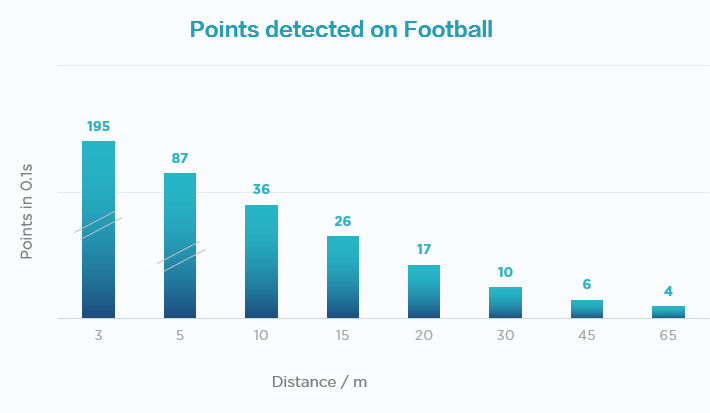 With smaller objects such as a 15cm-tall water bottle, the effective detection range of HAP was about 30 meters (with ＞ 3 points captured). 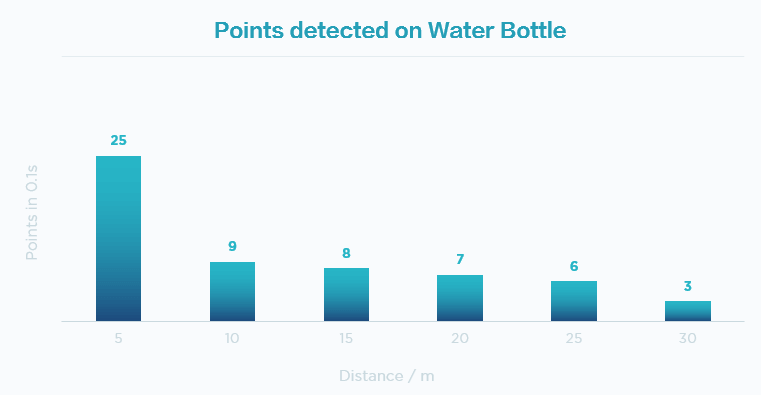 During the above tests, we also included bigger (e.g. a 30x30cm carton box) and smaller objects (e.g. a 10x10cm carton box) as the targets. The relevant test results can be downloaded in the full report upon request.

As shown above, HAP is a cost-effective solution that has been rigorously tested for automotive application. On top of that, the performance of HAP is a massive improvement from its predecessor Horizon. In itsefforts of developing LiDARs for various scenarios such as autonomous driving, robots,  and smart city, Livox has always been motivated by its mission to enhance users’ experience at a reasonable price. With this vision, we hope that more customers will choose Livox HAP for the development and commercial application of spatial intelligence.